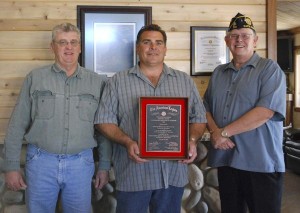 By Jillian Jamison, The Daily Press

ESCANABA – Industrial Maintenance Services (IMS) of Escanaba was recently awarded the American Legion’s National Outstanding Employer of Veterans Award for its “patriotism and good business sense. “The American Legion’s National Commander, David K. Rehbein, presented this and several other such awards to companies throughout the United States Aug. 26, during a General Session of The American Legion’s 91st National Convention in Louisville, KY. In reference to its excellent record of employing veterans, IMS was touted by Cmdr. Rehbein as serving as a model for corporate America. “They know that employing veterans is not only an intelligent business decision – because of vets’ traditions of dedication to duty and spirit of teamwork – but a fitting tribute to what these honorable men and women have contributed to our country. IMS Estimator Jim Vernon accepted the award from Gary Bjorkquist of Rapid River American Legion Post 301, on behalf of IMS, which is owned by John Soper Jr. of Wells. It was Bjorkquist who nominated Soper’s business for the award. “He came in to see me for a job when he got out of the service back in ’88 or ’89,” said Bjorkquist. “He was ambitious, hardworking and just the nicest guy. “After only a short time, as Bjorkquist recalled, Soper began a small business of his own. “He was destined to be an entrepreneur,” said Bjorkquist of Soper. “He was just so talented, and he called to ask for names of vets to hire. “Soper’s business continued to grow to the extent that he now has offices in Minnesota and Virginia, in addition to his local business. According to Bjorkquist, about 60 percent of Soper’s employees are vets, and 30-40 percent of his work is with VA hospitals all over the country. “He’s very generous, especially as far as helping other vets goes,” said Bjorkquist. “He donates to the food drive every year, and he donates very generously to the Marine Corps League’s Toys for Tots program,” added Bjorkquist. “I know there’s more he does and gives to, but the vets are just closest to his heart. He’s just one hell of a good guy.”

DETROIT – John Soper Jr., president and CEO of Industrial Maintenance Service, Escanaba, has been named the 2008 Michigan Minority Small Business Person of the Year by the U.S. Small Business Administration. IMS is a diversified general and heavy construction company which provides professional, technical, and construction services to production facilities, municipalities, government agencies, and the private industry.

“John Soper has shown strength and determination from his decision to serve his country to obtaining his goal of entrepreneurial success,” said Richard Temkin, SBA district director. “We are pleased that SBA’s program could play a part in helping him attain such success, and I am proud to announce that he is this year’s winner of the Michigan Minority Small Business Person of the Year award.”

Soper, a former U.S. Marine, honed his experience doing construction work and taking on as many general labor projects as he could in order to provide for his young family. In 1988, he began an apprenticeship with the Michigan Carpenters and Millwrights, where he spent eight years working at the highest level for his position. He provided expertise, organization, and leadership to tradesmen, employers and customers. At the age of 31, Soper took the plunge into the world of business ownership and, with a handful of tradesmen and managers, started doing business as Maintenance Services out of a garage next to his home in 1997. IMS had sales of $600,000 in its first year. Today, IMS has sales of $7.5 million and 40 employees. The company is headquartered in Escanaba with additional offices in Minnesota and Virginia.

In 2003, IMS was accepted into the SBA’s 8(a) Business Development program, which helps small disadvantaged businesses gain access to federal and private procurement markets. “The 8(a) program is an excellent strategy to ensure profitable growth in a company. There is no other program that could give us the knowledge we have gained as participants,” Soper said.

IMS was named as one of the Edward Lowe Foundation’s “50 Companies to Watch” in 2007. Soper donates to the Escanaba Area High School for an academic scholarship for any student interested in pursuing a career in construction or a related field. Soper also sponsors the boys and girl’s baseball teams, donates to the local veterans food drive, and has donated tools and equipment for playground construction at several local school districts.

An employee of Industrial Maintenance Services of Wells, Soper is a 2007 graduate of the Marquette Training Center of the Michigan Millwrights Apprenticeship Program, and a member of Carpenter/Millwright Local 1510.

The competition consists of written testing, which test general trade knowledge, mathematical ability, and problem solving. Contestants are then required to complete a special layout project which tests their technical proficiency at a specific task related to their craft.

All participants are assigned their own work area adjacent to the other contestants. Contestants are given a blueprint for the same project and are supplied with the same quantity of material and tools. The contestants are judged as the work is in progress as well as the completed project. Judges rate the contestants in such areas as accuracy of work, use of material, condition and use of tools, safety procedures and finished appearance. Judges for the contest are selected from participating contractors from around the state.

The four-year apprenticeship programs combine work-based learning with related classroom instruction. Apprentices must complete 660 hours of classroom instruction and a minimum of 5,200 work hours over four years. All apprentices receive graduated pay increases each year until graduation, upon which they become certified journeymen. They can continue as millwrights, or work toward supervision and management positions as foremen or project managers. All programs are certified by the U.S. Department of Labor, Office of Apprenticeship.